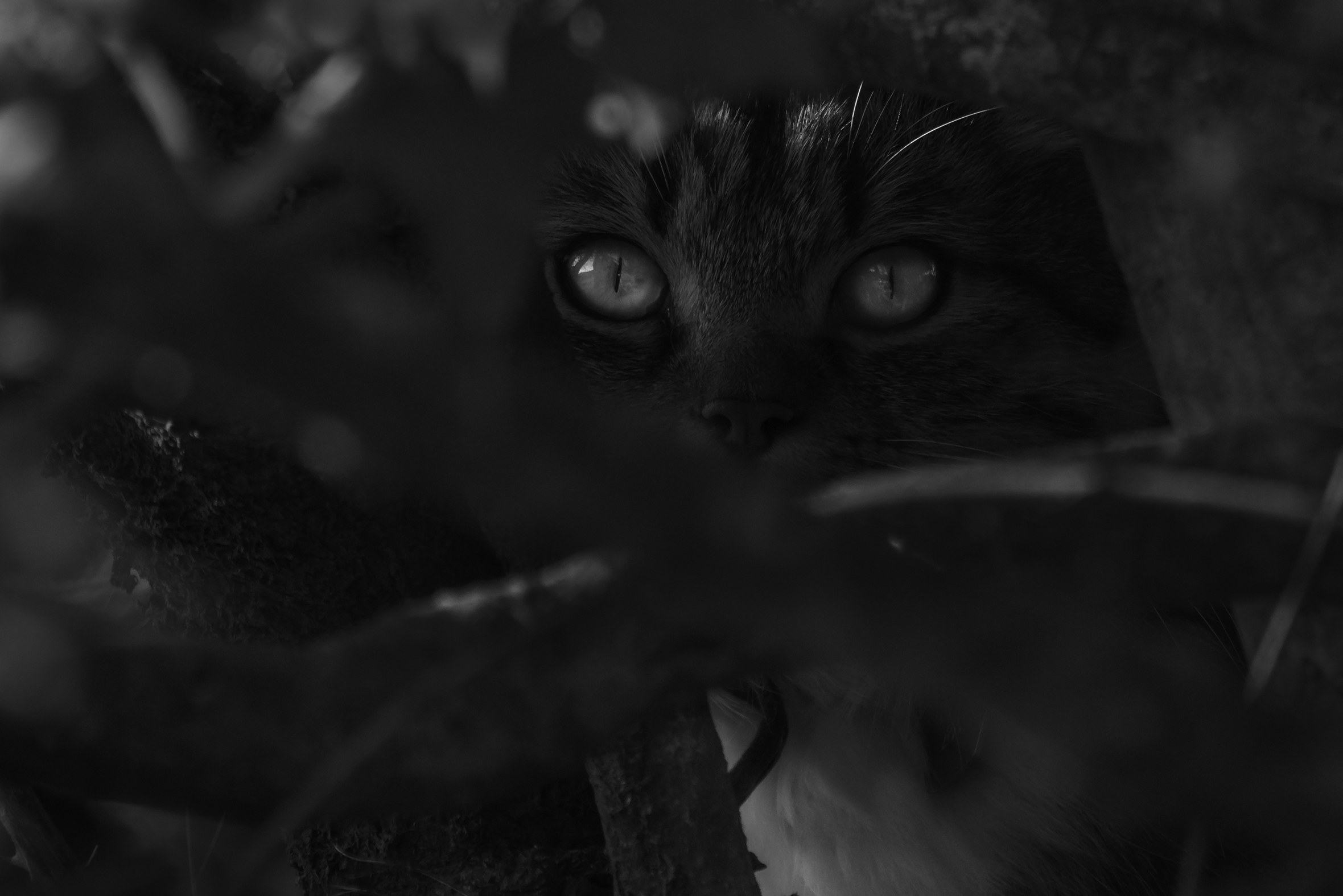 The only part of this story that I remember clearly is the end, but I’m going to tell it anyway. It’s the story of my final day with my childhood cat, whose name was not Midnight or Skippy or Fluffy. (Definitely not Fluffy.) We named him Survivor, because he was the last of three generations of cats. All the others had been run over by cars or had disappeared and were presumed dead. Yet somehow this short-haired black cat with the white patch on his chest had lived. He’d been with us through my parents’ divorce and the moves to new flats each time the lease had run out or we’d gotten evicted. He’d been with us through the failed attempt at living in the country, in a borrowed trailer on a borrowed lot overrun with poison oak and desiccated walnut trees. And he’d come back with us to San Francisco, where he’d continued to dodge the traffic, just like he’d dodged the owls and the coyotes in the country. But now he had feline leukemia. He lay in my arms, skinny as a pencil, light as yarn. All his life he had worn a tuxedo, like James Bond, and had walked through treacherous situations with elegance and style. But illness had made his black jacket and white shirt greasy and dull, and they hung loose on what was left of his body. Even I, at the age of eleven, could see that he had to be put down.

We were renting a four-room flat in San Francisco State University’s family student housing: my mother, my younger brother, me, and many cockroaches. There was a chunky black telephone and a big telephone book, which I must have used to find the number of the vet in my old neighborhood. My father lived across town with my older brother, and my younger brother was out playing. My mother, who’d surely been involved somehow in the decision to end Survivor’s life, was busy working, getting her college degree, and trying hard to be free of the nay-saying that had surrounded her since birth: No, you can’t afford to do this. No, you don’t deserve to do that. No, no, no.

So it was left to me to take Survivor. I wrapped him in a blanket or a towel and made sure I had two nickels for the streetcar fare. He did not require a box or carrier, as he was beyond trying to squirm out of my arms. The M car took Survivor and me down the tracks and through the Twin Peaks Tunnel. We emerged on the other side into sunlight filtered through fog, a drab yet bright glare that hurt my eyes after the tunnel’s darkness. I hoisted myself out of my seat, grabbed the metal pole, and walked carefully to avoid falling or dropping the cat. Then it was down the three steps, off the streetcar, and onto Castro Street, where I looked for the right number over a door, holding Survivor against my chest like a sleeping infant.

At the vet’s office, a man and a woman brought me into an examining room with a shiny metal table — the same color metal as the poles on the streetcar. I didn’t know which of them was the vet and which was the nurse, or if they were even called nurses when they worked on animals. They examined Survivor and spoke quietly to me, their voices filled with concern: Yes, it would be best to put him down. They handed my cat to me and asked if I wanted a few minutes alone with him first.

Holding Survivor in my arms, I shook my head no.

Do I need to go into what turns an eleven-year-old into such a stoic: embarrassed to be sentimental, determined to be detached? There were a lot of us out there — kids who were taught not to expect too much, to settle for less, to think, That’ll do; kids whose parents were working, getting their college degrees, and trying hard to be free of the naysaying that had surrounded them since birth. We grew up in neighborhoods where it was common to put on a kind of emotional armor every time we stepped outdoors, and often when we stayed indoors, too.

I told the man and woman that I was all set. I didn’t need a last moment alone with my cat. Then I looked down at Survivor, at his closed eyes, and I began to cry. Tears welled up, overflowed, dripped down my cheeks.

The vet and the nurse didn’t call my bluff. They simply slipped out of the room and shut the door. They gave me a few minutes to say goodbye.

This is the part of the story that I remember best: holding my scrawny cat against my chest and telling the people in charge that I didn’t need any more time with him. I remember my tears and the kind man and woman stepping out of the room, and then it was just me and the matted ball of fur that had once been Survivor, a cat who would come when I whistled; a cat who would get under the covers with me at night and put his head alongside mine on the pillow; a cat who always looked sophisticated in his black-and-white tuxedo, no matter what kind of dreary place we were living in.

I have pieced together everything else about this story from the facts I can confirm and from my general memories of that place and time. But that moment of saying no when I meant yes, of giving in to tears — that moment I can still see and hear with such vividness it feels as if it’s happening all over again.

I ’m fifty-three now. I live alone, never married, no children, too many shoes, one kayak, one sleeping bag, two baseball mitts, no smoking, no drugs, five to seven drinks a week, lots of Van Morrison records. Except for the evolution my body has gone through, from petite to lush to beginning to dry up, I am the same person I was at eleven. I still argue with my mother about the same things. I still dress mostly in jeans, T-shirts, and hooded sweatshirts. I still live in small apartments with furniture I picked up at the thrift store or from the sidewalk. I still live by the “that’ll do” philosophy I learned from my family and my neighbors growing up. I still keep myself walled off from my own desires. I still say no when I mean yes.

The essay “Survivor” [November 2018] ended with a punch to the gut, when Frances Lefkowitz describes living by “the ‘that’ll do’ philosophy . . . walled off from my own desires. I still say no when I mean yes.” Her story of her detached eleven-year-old self who “put on a kind of emotional armor” was familiar terrain for me. There must be many like us.

I am nearly a decade older than Lefkowitz, and our exact circumstances differ, but the messages we’ve internalized are similar. I spent years in service professions and became adept at reading people. Yet when someone asks me what I want, what my dreams are, I stare blankly, unable to hazard a reply even to myself.

Frances Lefkowitz’s “Survivor” eloquently describes what many who love animals feel but can’t verbalize. I’m glad we have her to speak for us.

Your November 2018 issue struck a chord. That last line of Frances Lefkowitz’s essay “Survivor” — “I still say no when I mean yes” — broke me open. And Tracy Frisch’s interview with Stacy Mitchell about the drawbacks of shopping with online retailer Amazon [“Unfair Advantage”] had me cheering.

I grew up on a family-owned dairy farm with parents who believed in the cooperative business model. I recognize the power of co-ops to help create a more equitable world. (I now work at one.) This issue showed me that there are many of us who feel the pull toward a healthier, more connected world. The time is ripe, the tools are available, and we are all we need to move things forward.

B.C. Hardwick, Vermont
More Letters
What Do You Think? We love getting letters to the editor for our Correspondence section.
Has something we published moved you? Fired you up? Did we miss the mark?
Send A Letter

Capitalism And The Wage System