I ’ve had to work through a lot of fear — I guess most women have — to get in touch with my own power, with my own ability to shape reality and to have influence in the world. That tends to be very terrifying to people. It implies enormous responsibility. The more power you have to shape reality, the more potential you have for fucking up. So you have to be willing to come to terms with that and say, “Yes, I can get in touch with this, and I will probably make mistakes along the way, and I don’t have to be perfect to do it.” It means facing that part of oneself shared by everyone in this culture — the self-hater, the internalization of all the external authorities, structures, and people we’ve encountered. The self-hater is always judging us and saying this is good or this is bad, and if you are bad, then you have to feel bad and essentially don’t even have the right to exist. It comes from growing up in a culture where we don’t see people as having inherent value or a right to exist, where worth is dependent on doing something, on following the rules, on placating the right gods, on achieving, on making money.

That semester, my body walked across the pristine campus in crisp autumn temperatures to attend lectures followed by receptions with platters of spice cookies and glass pitchers of fresh apple cider. My mind produced papers and exams and pored over books till one in the morning, when the library, named after John D. Rockefeller, finally closed. But some vital part of me — the part that houses my conviction — never made it across the ivy line. . . . I was getting tired of sucking in my stomach and holding my breath, trying to make myself fit.

And so the anger, for so long turned inward toward myself and my circumstances and the exasperating unfairness of it all, began to turn outward. My pride swelled in an attempt to erase years of shame. It was these coddled rich kids who were from the wrong side of the line, I began to believe, and I who was from the right — indeed, the righteous — side, for I had earned every single thing I had.

But the pride that comes from anger is hardly better than anger itself.

I stand up, heart pounding, mind racing. I tell [the men’s-movement group] about my father. His racism, I say, was only one reason I hated him, but it taught me to identify with the victims of racism. I call myself a gay warrior, a Queer National, and a Radical Faerie. I’ve been to a number of men’s gatherings, I tell them, and regret to say I’ve encountered more homophobia at this one than at any other: more unchallenged fag jokes, more fear of touching. “I’m not afraid of physical violence,” I say, “because I’m a strong motherfucker and I’m not afraid to fight.” (I figure that line is butch enough to win this crowd, and indeed they cheer. It also happens to be true.) But I don’t feel free here to let down my armor all the way. I say I came to the conference as a sort of emissary: the gay tribe could learn from straight men about summoning Zeus energy and the power to act in the world, and gay men have a lot to teach about men loving men. I bring up the issue of touching, how little of it there’s been at this gathering. I say I’m disappointed that in my small group one guy seemed very nervous about physical contact after learning I’m gay. Finally, I assert that the biggest taboo in men’s work is acknowledging that men love other men, and that we shouldn’t be afraid of that.

I get a standing ovation.

My landlord, a short Iranian, lived around the corner, and he would often show up at the house at odd hours to work on the plumbing or heating. . . .

“Did they ever beat you?” I asked.

“Oh, yes, many times.” He had hated the shah, he said, but after the shah had been overthrown, he’d hated the ayatollah even more, and he’d spoken out against him. “I was lucky not to be imprisoned or killed. Instead they let me leave to come here. They were probably happy to see me go.”

My landlord was also a supporter of President Bush, and I once asked him how he could support a president who’d invaded Iraq. He just laughed. “There is so much you don’t understand. Saddam was a bad, bad man. He killed a lot of my people in the war. He deserved death and hell beyond that.”

“Yes, but Bush wants to attack Iran too.”

His remarks made me angry, mostly because there was some truth to them.

The racists were the lunch-counter owners who refused to serve blacks, the warmongers were the generals who planned wars and ordered the killing of innocent people, and the polluters were the industrialists whose factories fouled the air, water, and land. I was a good guy, boycotting, marching, and sitting-in to protest the actions of the bad guys.

But now, no matter how much I protest, an honest look at myself and my relationship with the rest of the world reveals ways that I, too, am part of the problem. I notice that on initial contact I’m more suspicious of Mexicans than of whites. I see that I’m addicted to a standard of living maintained at the expense of poor people around the world and perpetuated through military force. And I realize that my consumption of resources and creation of waste contribute to the pollution problem. The line that separates me from the bad guys is blurred.

There are two things we have to do as a culture to end war: One is to take full responsibility for our wounded. It’s not enough just to “bring the boys home,” because they aren’t boys anymore, and getting them home physically does not do it. We need to help them heal and help shoulder their burden. The other thing we need to do is take responsibility for the damage we have done to other countries and their people. . . .

Instead of having a parade and going shopping, we could use our veterans’ holidays as an occasion for storytelling. Open the churches and temples and synagogues and mosques and community centers and libraries across the country, and invite the veterans in to tell their stories. Purification ceremonies and storytelling events are also opportunities for the community to speak to veterans and take some of the burden of guilt off them and declare our oneness with them: “You killed in our name, because we ordered you to, so we take responsibility for it, too.”

I teach online freshman composition courses, and at least a half dozen of my students in every class — usually middle-aged men and women getting their diplomas late in life — write their argument papers about immigration policy in the U.S. . . .

Now, if I were a student, and my instructor had a Spanish surname like mine, I’m not sure I would have the audacity to talk about immigrants the way my students do. I often tell them I’m married to a man from Mexico to give them the chance to save face, but they continue on: Mexicans (for that’s whom they are really talking about) are not paying taxes; they bring their unwanted culture with them; and they have the nerve to speak Spanish instead of English. They fill our streets with crime and our hospitals with babies.

I try hard not to take any of this personally. When I’m grading papers with a glass of wine in hand, I even have fun arguing with them. I make margin notes describing my husband’s family on his father’s side, which includes lawyers, dentists, accountants, and businesspeople both in the U.S. and in Mexico. I describe my own third-generation Mexican American family, my LA cousins who own their own homes and go to state colleges.

It’s July Fourth, and I’m sitting in my father’s living room, watching the televised fireworks from the nation’s capital. My elderly father has gone to bed early, and I am relieved to be off duty from caring for him. Then a neighbor sets off some firecrackers, waking my father, who wanders into the living room to watch the finale of the celebration in Washington, D.C.

My father is a veteran of World War II. He has never spoken to my siblings and me about his war experiences, though we have prodded him. We know by the yellowed newspaper reports my mother saved that his infantry division helped liberate a concentration camp.

On TV the citizens of our nation’s capital begin to sing our national anthem, and my father joins them. He even attempts those unreachable high notes. I remain mute, because I’m disgusted with the body count in Iraq, but my damaged, taciturn father sings at the top of his lungs. 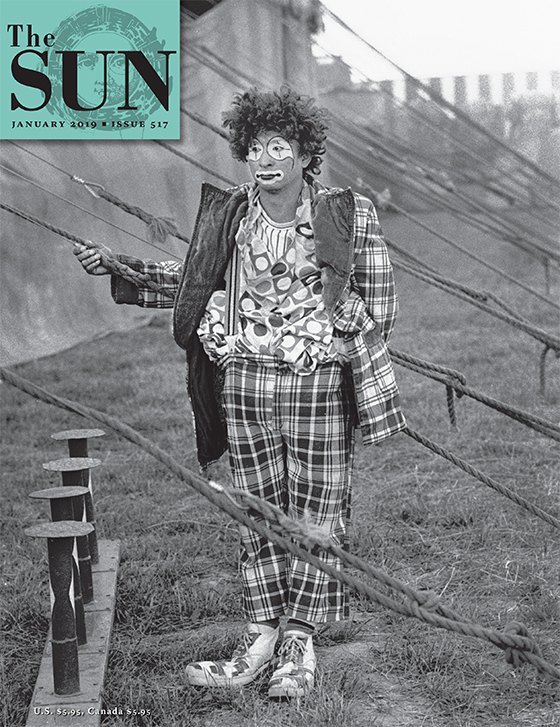 By Marion Winik
The Dog-Eared Page

The Only One She Told