As far as I know, my grandmother’s only regret in life was that she died on a Thursday. “Damnation!” she cursed fate in front of her sister Gert, her four children, and her thirteen grandchildren. It was Aunt Gert’s idea that we all be there, huddled around my grandmother’s bed to remind that lady of what her seventy-two years had accomplished and thus ease her pain in passing. It was important that we be there, Aunt Gert had said, because “my sister loves her children so.” “Damnation!” my grandmother repeated. “Bridge luncheon is tomorrow.”

“Delirious,” my mother whispered from behind her steady flow of tears.

“No, dear,” Aunt Gert said, looking curiously as though she had just been made privy to a fine secret. “She has been on a winnin’ streak.”

And without so much as a good-bye, a bubble rose gently out of my grandmother’s mouth and popped.

“She loved each of you so very much,” Aunt Gert eulogized with an air of forced protocol. Then, leading my baby cousin out of the room, she added: “And she was one fine card player.”

My grandmother and Aunt Gert belonged to the Every-Other-Friday-Afternoon Bridge Luncheon. My grandmother, having married my well-to-do grandfather, was a charter member of that organization. Aunt Gert had just been lucky.

Thelma Coulter, the hard-of-hearing secretary-treasurer of the luncheon, had been shopping in front of Head’s Dry Goods and never heard the shrieks warning that old Mr. Skitner was coming. Everyone screamed an alarm (“Skitner!”) and ran for cover when old Mr. Skitner’s Chrysler appeared, for no one had been able to summon the disrespect to tell the old man, whose grandfather had founded our town, that his Chrysler more often sped along our sidewalks than along our streets and that he shouldn’t drive; the town had just preferred to be polite and dodge him. So Thelma Coulter never even attempted to get inside, off the sidewalk, and old Mr. Skitner, not actually noticing Thelma Coulter lying spread-eagled across his expansive hood, just drove home.

He was reaching up to close his garage door when the sheriff paid him a visit, asking our confused first citizen to retire from behind the wheel. “Please give me the keys, Mr. Skitner, sir.” Then the sheriff rolled Thelma Coulter into the trunk of his Plymouth and carted her over to the funeral parlor.

“A spot has just opened in the luncheon,” my grandmother told Aunt Gert over the phone from Wiggemire’s Drugstore. “I think I can get you in.”

Aunt Gert sat down on her bed. “My God, who died?”

Elwood Drucker picks up Aunt Gert on Saturday nights, and they drive in to Tom’s Cafe and have dinner. After finishing two blue-plate specials (Elwood’s without a potato), they stop by the Dairy Queen for ice creams. Then they drive back out to my grandmother’s and watch color TV in Aunt Gert’s room until midnight, when Elwood leaves and Aunt Gert goes to bed. I remember well over twenty years ago, before I ever started school, Aunt Gert and Elwood driving in to Tom’s, coming home with ice creams for my brother and me, then retiring to Aunt Gert’s room to watch television and, my grandmother used to warn, “not be disturbed.” When we were young, my brother and I spent every summer out at our grandmother’s, where Aunt Gert would cook for us, play with us, and love us dreadfully six nights a week. But Saturday nights were Elwood’s. They had been for the past twenty years and would be for the next twenty.

My grandmother not only considered Elwood Drucker “as ugly as sin and half as fun,” but a mama’s boy as well. And when to my grandmother’s constrained joy his mama died, Elwood’s sister, Hazel, snatched up her mama’s apron before the casket lid could be closed and tied that apron’s strings in a double knot around Elwood’s neck. “Gert should have dumped him thirty-five years ago,” my grandmother once told me. “That is what love will getcha.”

My grandmother didn’t marry for love. “But I grew to love your grandfather,” she would reason. “Look at all these kids!” Her parents had always had trouble making ends meet, but my grandfather’s family owned a nursery, miles of land all around Skitnerville. To my grandmother, the land had meant security, and she hadn’t had to think twice about my grandfather’s proposal. “Ironic,” I once heard her say as she finished her third glass of sherry, “that Gert was the one in love and I ended up with the family.”

Aunt Gert worked in a millinery shop until the afternoon my grandfather had a heart attack beside the green house and died. Then she moved in with her sister to help her care for her children and large house. Finances, not housekeeping, were my grandmother’s forte. Since her wedding, she had kept the books for the nursery. And by the day she died, she had almost doubled my grandfather’s assets by subdividing chunks of the old nursery and selling off the lots at lucrative prices. So my grandmother was glad for her sister’s help.

I first comprehended the gravity of the Every-Other-Friday-Afternoon Bridge Luncheon on the day John Kennedy died. My grandmother and Aunt Gert were hostessing, my brother was at school, and I was banished to Aunt Gert’s room on the back of my grandmother’s house.

“Use Aunt Gert’s bathroom,” my grandmother said as she set a cheese sandwich on the nightstand for me. “And do not turn the television up loud.”

Aunt Gert looked at me sadly. “I will bring you some mixed nuts, Chockie,” she promised. And my grandmother closed the door.

I switched on the television: “We interrupt this program to bring you the following announcement. Twenty minutes ago in Dallas, Texas, President John F. Kennedy . . .”

“Gert, you are a dummy. Will you check the meat loaf?” I heard my grandmother say above the shuffle of cards and the jingle of silver nickles. Slowly, her eyes rose to meet mine. “Didn’t I ask you to stay in your Aunt Gert’s room?”

“The President’s been killed,” I said. “Heard it on the TV.”

There was only a crash in the kitchen. “Gert, do be careful,” my grandmother said. The women at the bridge tables played with their cards and continued surreptitiously eyeing one another, unaffected. “Too, too bad,” my grandmother said, and sorted out her hand. “Now run along.”

I returned to my exile, watching pink-clad Jacqueline Kennedy crawl onto the back of the limousine, time and time again. Eventually, the door opened and Aunt Gert entered, a dish of mixed nuts in her hand and tears rolling from her eyes.

I spent the day after my grandmother’s death keeping an eye on my baby cousin in my grandmother’s backyard. Aunt Gert pulled her sister’s car up the gravel road and parked it. She was dressed in her good gray suit, the one she usually wore to bridge luncheon. Miss Susan Conklin had served chicken breasts which had been greasy. The door prize was a lavender sachet (Head’s Dry Goods. Cheap.). And Miss Gertrude Fenton was high point.

Aunt Gert eased into the lawn chair next to mine. “For the first time since your grandmother finagled me in twelve years ago.” She reached behind her neck and unclasped the pearl necklace we kids had given her for her sixty-fifth birthday. She dropped it into her pocket. “I won for her.”

“You think they let you win?”

“You know better than that. And Agnes Waford was even sittin’ in for your grandmother. She cheats.”

“You are lookin’ at the first woman to ever quit the Every-Other-Friday-Afternoon Bridge Luncheon. Twelve years I have waited to spend two consecutive Fridays away from a deck of cards.” Aunt Gert spryly jumped up to take my little cousin’s hand and led him away from the rusted trash barrels guarding the back hedge.

“Why didn’t you quit before?”

“Your grandmother. She lived for the luncheon and would not have understood. And she was never anything but good to me. She let me love her family like it was my own, and not many would do that. An afternoon of bridge every other week was not much to pay.” She reached down, placed her hands firmly under my baby cousin’s outstretched arms, and lifted him to her face. He kissed her on the cheek, then buried his little nose in her wrinkled neck. “And I don’t want to die like your grandmother did,” Aunt Gert whispered as she turned and started with my cousin towards the house, staring straight ahead, “Without havin’ taken the time to love those who loved her.”

But her words rang over the rusted trash barrels, the back hedge, and the forgotten rows of huge trees beyond, which once had been saplings under my grandfather’s care. Above them and into the pink clouds, the color of Jacqueline Kennedy’s blood-spattered dress. Leaving Skitnerville and the Every-Other-Friday-Afternoon Bridge Luncheon far behind. And me, crying for my grandmother in her backyard. 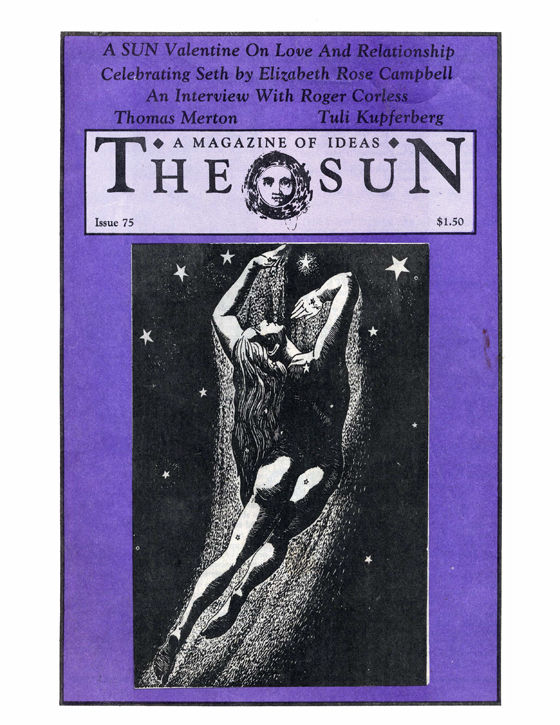 An Interview With Roger Corless

Going To The Movies