“As a white person,” a student asks me, “are you uncomfortable teaching black literature to blacks?”

In my freshman English class at “historically black” North Carolina Central University I teach Afro-American literature exclusively, although I’d prefer to teach literature without regard to race, creed, color, or place of national origin. My black colleagues have a strong preference for an Afro-American anthology, and rather than pound my fist for academic freedom, for the sake of harmony I defer to them open handedly. My concession is partly motivated by the lack of a genuinely multiracial reader, one that is more than tokenly integrated.

The reasons for the choice of Afro-American literature are diverse. First, the belief persists that, despite the increased racial awareness of blacks, the education system has largely ignored their heritage. Second, by focusing on the accomplishments of black writers, our students will “enhance their self-esteem” which, educators believe, is a precondition to learning. My consent to using an Afro-American reader is not a mere courtesy to my colleagues, but recognizes the merit of these arguments.

I have become conscious of a mode of writing from my students which resembles hagiography. It is most obvious when dealing with a subject such as Dr. King. When discussing black literature, the students often treat the writer deferentially and uncritically. J. Saunders Redding describes this mode of writing as the “race-proud picture.” A politically-inclined black colleague prefers to see it as “third world,” an attitude of engaged feeling rather than critical detachment. In a term paper on Richard Wright’s Black Boy, for example, a student hails the protagonist, who at one point lynches a cat, as a paragon of virtue, a brave man fighting injustice in an oppressive society: the student ignores the protagonist’s gratuitous violence, self-hatred, and contempt. A middle-class southern Baptist finds few problems praising an anti-religious radical leftist. Perhaps I underestimate the extent of my student’s racial loyalties which override other concerns. On the other hand, I wonder if this insistence on “enhancing self-esteem” diminishes the students’ ability to accept complexity and contradiction within themselves, within society. In recovering their pasts my students tend to seek role models and to become advocates of their subjects.

As we are discussing a Countee Cullen poem, Loviette raises her hand and apologizes for asking an “irrelevant” question, but “why,” she wants to know, “are we only reading black literature?” I leave it for others to answer her; the class is about evenly divided. Kevin says he is “tired” of reading about blacks constantly being victimized, a persistent theme in many of our Afro-American readings. (A question of my own: does a steady diet of such literature truly enhance self-esteem or does it evoke in the reader a sense of inevitable defeat, if not paranoia?) A pattern emerges: students from small rural towns seem to have had little or no exposure to black literature: one girl from Fuquay-Varina exclaims that she “didn’t even know it existed.” This course has been a “revelation” to her. Others from urban areas like Winston-Salem or Charlotte have had their share of black studies and express interest in other reading.

Once again, I teach Charles Chestnutt’s “The Bouquet,” a short story in a sentimental vein of a black child’s love for her white teacher and of how a racist society cruelly separates them at the moment of the teacher’s death. As the child is denied access to the cemetery, her dog, ironically enough, sneaks through the fence to place a bouquet on the teacher’s grave. The story, though well crafted, seems little more than a Victorian period piece, and I secretly resent that I am not teaching the headier brew of a Hawthorne, a Melville, or a Chekov. My students might see in the fate of Russian serfs some links with their own historical experience. When a recent graduate, now a bureaucrat, writes to the school newspaper complaining that corporate racism has depersonalized him, I wonder if Kafka might have put him more in touch with his situation.

Yet the teacher who asks his black students to look sympathetically into American or European literature must confront the brick wall of racism. Even a writer as liberally disposed as Mark Twain, Benjamin Quarles reminds us, uses stereotypes in his writing. For Melville the Negro is an abstraction, the mystical power of blackness, inscrutable and terrible. At one point Melville compares the loyalty of the docile black to that of a faithful Labrador. Hawthorne, a recent biography points out, was no friend of the abolitionist movement. And what does one say of the more overt racists?

Yet the notion that one should teach only by positive example distorts and misleads. I recall, for example, the sense of exhilaration the narrator expresses in Black Boy at discovering H.L. Mencken in the local library; here is an author, Wright states, who is white and yet damns the bumptious corruption of American society. But Mencken was hardly a progressive on racial questions. The racism of Shakespeare, or later of Eliot or cummings, is problematic, despite their calls for largesse of spirit; their limits, perhaps as much as their sympathies, offer means to define one’s self.

On the final exam I ask my students to analyze Robert Frost’s “Acquainted with the Night” — without identifying the author. The poem describes a man, any man, walking in the city streets on a rainy night; images of death and loneliness confront him: he passes a watchman and drops his eyes. A cry comes from far over the rooftops. Before him looms a “clock against the sky” which proclaims “the time is neither wrong nor right.” One student writes that the poem describes the sad tale of a black man driven from the ghetto; he shrinks from the gaze of the racist cop. The interpretation is valid — however un-Frostian — but I am discomfited by her inability — or unwillingness — to feel a more universal sympathy.

When Gwendolyn Brooks appeared on campus, she wondered openly why whites reproach black writers for their supposed lack of “universality.” Her purpose for writing is to acclaim “black unity” and she finds in Chicago’s ghetto bars, where she holds open readings, the stuff of great poetry. She asks the few whites in the audience why white critics tend not to see black writers as in the mainstream, but as a current apart. As she is looking directly at me, a conspicuous paleface, I try to answer her, but somewhere between the local and the infinite I lose my way, and find myself arguing in agreement. I’m confused. “Black unity,” needless to say, excludes me, but, believing as I do that a sense of identity is the surest route to the transcendent, the more he or she is black, the more the black writer approaches the universal. Then, too, who lives or writes purely of essences, racial or otherwise? Aren’t we all, writers especially, many things at once, aspects of each other?

When I teach black literature, I am handed a ready-made category, a racial frame of reference, by which to analyze and judge, though I prefer to read and teach without preconceptions, or at least with categories of my own choosing. As I teach Afro-American literature, I often find myself stressing the racial over the personal, technical, or historical. Certain black writers — Jean Toomer, the author of Cane, for one — insisted upon their prerogatives as artists above their claims as black men, though history may accord a different judgment. What besides skin tone links Phyllis Wheatley, the eighteenth-century poet who wrote in a conventional neo-classical style, and Ishmael Reed, the contemporary novelist and poet with his extravagant surrealist vision? The anthologies of black literature suggest a connection.

In his poem “Heritage,” Countee Cullen vividly describes the Afro-American’s “double part” as a native of two conflicting worlds, jungle track and city streets. Langston Hughes’ “I, Too, Sing America” acknowledges his debt to that tradition of American poetry which extends back to Whitman, even as he writes a discordant poem of protest. Ralph Ellison is emphatic in citing Kafka’s writings as precursor to his own Invisible Man. Even the racial militancy of Claude McKay cannot conceal the poet’s use of conventional sonnet form. Though he lashes out with a “thousand blows” against the “mad and hungry” dogs of the racists, McKay expresses his rage in neat iambic pentameter with regular rhyme. Thus, McKay allies himself with a tradition that extends across the ocean not to Africa, but to Elizabethan England and Renaissance Italy.

Fifty years ago Langston Hughes wrote in “The Negro Artist and the Racial Mountain” that he was “ashamed” of the black poet who wanted to be a “poet,” not a “Negro poet.” Only out of the crucible of his own experience, Hughes asserts, can the poet create; he rejects slavish imitations of European culture. Yet, he adds, “If white people are pleased, we are glad. If they are not, it doesn’t matter.” On the other hand, I recall James Baldwin’s plea — made early in his career — that he did not want to be just a “Negro writer” but a “writer” (much as Saul Bellow vehemently disclaims the label of “Jewish writer”). Richard Wright insists that Bigger Thomas in Native Son is “white, too.” The pulls of the particular and universal are paradoxical in any artist — a fact, I think, that many white readers less willingly concede to black writers. The tendency of a white teacher of black writers, it seems to me, is to look in their writings for The Voice of the Negro People, not recognizing that Toni Morrison’s voice is as uniquely hers as William Faulkner’s is uniquely his.

I teach “If We Must Die” and make the claim that the persona speaks collectively as the voice of all black people.

“Why all black people?” James corrects me. “Why not all oppressed people?”

In closing I defer to Langston Hughes. In “Theme for English B” a black college student writes his “page” for his white instructor: he wonders if it will be a “colored page.” 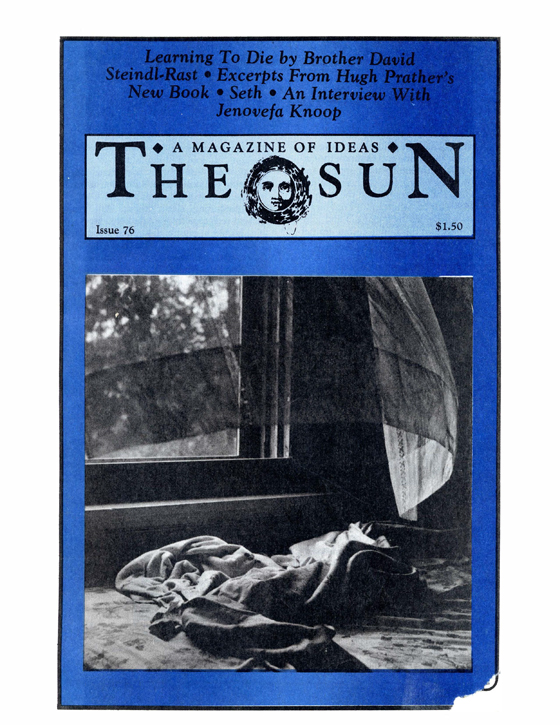 The Most Important Influence On My Life