“We need a goat,” Sandra says.

“Goats are very gentle. We can get a good milk goat in Canton for $50.”

So I take the dead battery out of the old Chevy pickup and charge it up in the garage and the next day we drive to Canton to get a goat. All six of us pile into the truck — Sandra and I, and Chico and Morgan, and Brook and James. The Chevy purrs along Hwy. 19, slicing through the July heat, to First Monday Trade’s Day in Canton. I park the truck and we’re walking down the dirt road to the hollow by the river where animals are kept and sold.

“Don’t forget to bargain with him,” says Sandra.

The early afternoon heat is killing. We move along down the road in slow motion, dripping sweat. The youngest kid asks when are we going home. The first man I see with goats for sale I approach. He’s just like a farmer in the movies, fat and beefy, with overalls on, except he’s got a wide straw hat instead of an International Harvester’s cap.

There are only two goats. The big one’s got horns and a beard under its chin and I’m sure he’s male until the little one reaches under and butts her udders, fat with milk, and starts sucking. My oldest kid and I stroke her greasy hide. She seems gentle enough.

I whip out the checkbook. Sandra makes faces, trying to give me the sign to bargain.

The straw-hatted farmer puts a noose around the nanny’s neck and hands me the other end. I start pulling. The goat starts yelling and digs in her feet.

“Don’t worry about the baby,” he says, “She’ll follow the mama wherever she goes.”

After about ten minutes of sweat and struggle, I get the nanny to the pickup, lower the tailgate, jump in and try to pull her up. Nothing doing. Some guy stops and shows me how to pick her up by holding all four of her legs. The baby goat freaks out and tries to jump in. He starts baaing and moving around the truck. I grab him and lift him up. Mama is about to jump out so I yell at Sandra to get inside the truck’s cab and drive. I close the tailgate and get up with the goats. I straddle the nanny, almost sit on her and wrap my arms around her neck, to hold her still. She jumps back and almost gores me with one of her horns, so I have to twist my head to the side. Here I am riding along in the bed of a pickup, straddling a goat, bent over. Ten miles home. My back is killing me.

We put the goat out back in the pen we made for the chickens. Sandra fills an old water bucket and we set it out for the nanny and her baby to drink. The kids circle around petting, trying to get hold of the baby, who is skittish and moves pretty fast. It’s hot. Sandra and I split for the house.

I am into my fourth beer when I hear a strange clunk and scrape against the siding of the house.

“Go outside and look,” I say to Sandra.

“The goats are eating the rosebushes,” she says, coming back into the house.

I give her the old “what-have-you-gotten-us-into” look. Sandra, without saying a word, gets a rope out of the kitchen cabinet and goes out to put the goat back in the pen.

We sleep late the next morning. I am waking slowly, drifting in and out of sleep, looking out the window through nearly closed eyes, guessing at the nature of the coming day. Then I see them both, mama and child, reaching up with great grace, stripping the fruit trees of leaves.

“You didn’t tie the mama up!” I shout at Sandra.

She snaps her head off the bed, hair falling in her eyes. “What? What did you say?”

I groan, make a big display, swing out of bed, pick up my pants from the floor, pull them on and stumble out the door into the morning light.

Sandra cooks me a big breakfast. Eggs. Toast with marmalade. Coffee. Sandra never cooks me anything unless she’s feeling guilty. Maybe the guilt will hold out and I’ll get a cooked lunch and supper.

After breakfast she says, “Time to milk the goat.”

“That’s why we got her,” she says. “She’s not a pet. She’s a contributing member of the household, part of our plan for self-sufficiency and liberation from the system.”

We go out back. I straddle the goat like I did coming over from Canton in the pickup, and Sandra sits down on the ground and puts a pail under the goat.

The goat puts her foot in the pail, leaving brown marks that remind me of chicken shit. Sandra goes inside to wash out the pail.

I say to the goat, “Listen, sweetheart, we won’t take all your milk. I promise. We’ll leave plenty for your baby.”

Sandra comes back out. I tell her the goat and I have had a good talk, and Sandra sits down again. She squeezes the teat like the book says. Nothing comes out. She tries half a dozen more times, squeezing harder on each try.

“Use both hands,” I suggest.

She does. She squeezes hard, and grunts, and a little sharp trail of milk shoots out and hits her right in the eye. The goat kicks and I get a horn scratch in my right arm and the bucket goes flying.

I pick up the bucket and start heading for the house, but Sandra shouts, “Wait. We can’t give up so easily. You milk the goat, I’ll hold. You can sit on your butt and save your back.”

Sandra gets down to take a turn and she hits the rhythm, too. The milk is flowing well and I relax my hold on the goat, figuring she is adjusting to what is going on. Suddenly she bolts and darts about five feet away, then stops to chew on some weeds. Somehow she misses knocking over the bucket.

“We’d better leave the rest for the baby,” Sandra says. We go inside and strain the milk, our treasure, through a coffee strainer into a glass. It fills up half the glass.

I take a swallow. It tastes like regular skim milk, with a slightly different aftertaste, kind of like tobacco.

“Well,” I say, “that took us about an hour. I could go out to work for the system at some scut job for an hour and make enough to buy three gallons of milk.”

“So?” I say, reaching into the refrigerator for a cold beer. 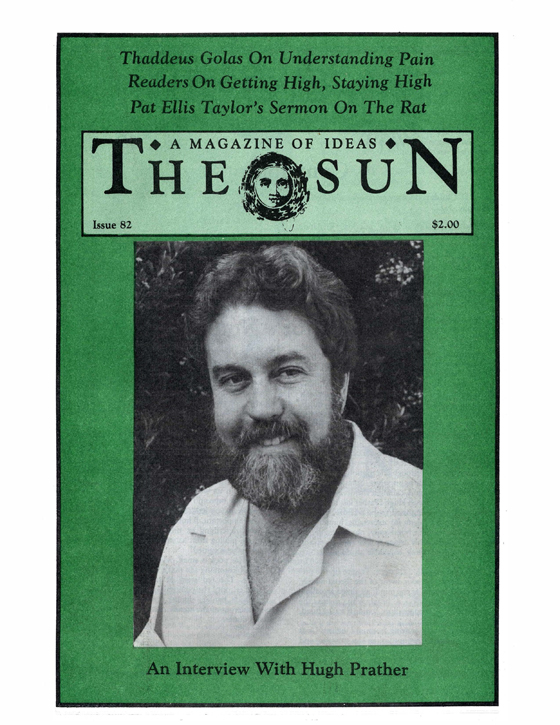 Sermon On The Rat