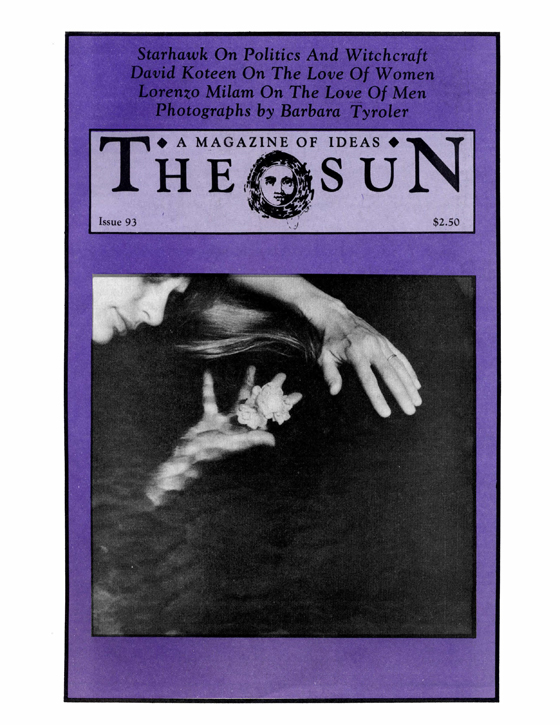 Kindness is more important than wisdom, and the recognition of this is the beginning of wisdom.

An Interview With Starhawk

When we’re striving for all light we get away from the dark. As a witch I see the world itself as sacred. If there were such a thing as heresy in the craft, which there isn’t, that would be it — saying that you want to get away from half of what’s in the world. It’s a denial of what sacredness is. That particular metaphor, the light/dark split, is really a fundamental basis of racism in western culture. It was used very deliberately in the sixteenth and seventeenth centuries, in the beginning of the slave trade. Part of the justification for taking the African slaves was that their color proved they were cursed by God. It has always been a metaphor used for genocide against people who were dark, against dark-haired Jews.

My hands begin to hurt from the constant pressure of the crutches. Jaggers of pain run up my arm. It feels as if I have bared every nerve in my arms. I am sweating, and the sweat runs down my forehead, into my eyes. I have to stop each few steps to wipe the sweat from my eyes. Then I put sore hands on crutches again, and walk a few more steps, then I must stop to wipe my eyes again.

The inexorable pride that haunts me, the fever of gluttony, and lust that would forego God for an ecstatic moment are the gas, grease, and oil that lubricate this Hellbent vehicle. They are tears the sperm that race up the tube; they excite and terrify but they will never, never save me.

The hurricane gathers speed as it nears the Gulf Coast, winds now being clocked in excess of one hundred miles an hour. For two days newsmen have been reporting her progress and are congregating in Corpus Christi for a firsthand look at the expected devastation.

Zen And The Art Of Peanut Butter

February 2022 In this issue

January 2022 In this issue
Browse by Year