Last fall, at a writing retreat sponsored by The Sun, a man seated next to me at breakfast became visibly agitated when our conversation turned to Afghanistan. Al had served in Vietnam and said he was appalled that the United States was fighting yet another unwinnable war. He told me that he’d joined the air force as a young man and had been a fighter pilot for many years. Then he’d spent more than a decade selling arms for the government and, he said with a slightly pained expression, “living the lifestyle of a global arms salesman.” I asked what that meant. For example, Al said, he used to receive a twenty-thousand-dollar monthly stipend solely to throw lavish parties for potential customers.

I’ve met many Sun readers over the years but never one who’d found his way to the magazine from deep inside the military-industrial complex. Al retired from the air force nearly twenty years ago, then watched helplessly as his wife died of cancer — an experience he described as more traumatic than wartime combat. Her death brought his world crumbling down around him — and, as he began to build a new life, his broken heart opened to the unbearable losses that others bear. It was, he said, as if he’d awakened from a “long sleep.” Around this time he began to work on behalf of numerous nonprofit causes. One day a friend showed him a copy of The Sun. The magazine moved him to tears. He hasn’t missed an issue since.

I marveled at the different paths Al and I had traveled to arrive at the same breakfast table. While he was flying combat missions in Vietnam, I was protesting the war. While he was studying the intricacies of new weapon systems, I was struggling to keep a new magazine alive. Yet here we were, all these years later, two men with more in common than either of us would once have guessed. We both believed in a person’s lifelong ability to change and grow. We both understood the power of a transformative experience to crack our world open. I was in my late twenties when it happened to me: my infant son died, my wife and I divorced, my father’s body was ravaged by cancer — and I woke up a little, too. That’s when I started The Sun. Looking into Al’s eyes was like looking at myself in the mirror: slightly different body, slightly different personality — big deal.

Here at The Sun, I’ve tried to avoid sleepwalking by challenging the conventional business model and by following Gandhi’s suggestion to be the change we want to see in the world. But unless I’m vigilant, I can still find myself in a trance: working so hard that the work I love turns into a forced march; measuring my self-worth by how “efficient” I’ve been. During the worst of last year’s recession, however, when The Sun was losing subscribers at an unprecedented rate and many other magazines were disappearing altogether, I knew it was imperative for me to stay awake. We froze salaries, reduced pay rates to writers and photographers, trimmed expenses wherever we could — and still I worried that more drastic steps might be necessary. I told myself not to panic; during the past thirty-six years The Sun had survived more than one recession. I focused on the enduring value of this ad-free, reader-supported magazine, and I reminded myself that The Sun is sustained not just by our dedicated staff but by a community of readers who care deeply about the magazine’s future.

As it turned out, readers like you made it possible for us to make ends meet last year without having to cut pages from the magazine or lay off staff. Thanks to your contributions, we were even able to continue giving free subscriptions to prisoners and to those who have fallen on especially hard times. I’m grateful that our subscribers understand that a reader-supported magazine means readers keep the magazine alive — not advertisers, not a corporate benefactor, and not some foundation with its own rarefied ideas about literature.

I can’t predict where the economy is heading, but I know one thing for certain: even in the best of times, it’s unusual for an independent magazine to survive year after year. So, once again, I’m asking for your support as a Friend of The Sun. Your tax-deductible donation will help ensure that each monthly issue continues to bear witness to the sorrows of existence and to celebrate the transcendent power of love.

When I started The Sun in 1974, I naively imagined that people would appreciate the magazine only if they’d read the same metaphysical tracts I’d read; done the same drugs; ate brown rice, not white; knelt before the goddess of love, never the god of war. Foolish man! These days I wouldn’t even try to describe a “typical” reader. Why reduce the complexity of a person’s life to the kind of demographic data other magazines use to sell advertising? What matters to me instead is that, through good times and bad, The Sun keeps reminding us of our common humanity and helps us to stay awake. Whether you’re young or old, liberal or conservative, a bohemian artist or a former fighter pilot, I want every issue to be a hand on your shoulder, a voice in your ear whispering, Don’t go back to sleep.

P.S.: You can send your check to The Sun, 107 North Roberson Street, Chapel Hill, NC 27516. You can also donate online at www.thesunmagazine.org. Your donation is tax-deductible, and we’ll send a receipt for your records.

If you’re a subscriber, you may already have seen this letter in your mailbox. We publish it in the magazine for the benefit of our newsstand readers. 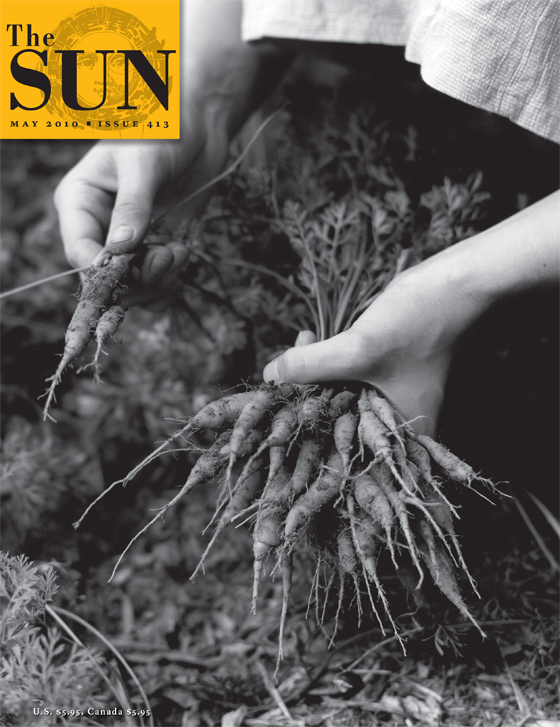 Three Days Before My Mother’s Birthday

By Louis B. Jones